WQXR, a classical music station in New York, runs a program called “Meet the Composer,” hosted by Nadia Sirota and produced by Thea Chaloner and Alexander Overington (by the way, an Oberlin grad).  Not long ago, the composer they met was John Luther Adams. Now, we know this wasn’t the mysterious third John Adams to become president of the United States only to fall out of the history books and our memories. But neither was he the guy you’re probably thinking about, the minimalist composer John Coolidge Adams much in the news of late as his Death of Klinghoffer recently opened at the Met. Rather, John Luther Adams is a composer inspired by nature who won the Pulitzer this year for his breathtaking composition, Become Ocean. (Click here for a free listen to its premier at Carnegie Hall.) Sirota’s interview with Adams was picked up and showcased for Radiolab’s  October 3, 2014 edition, a program produced by some of my favorite Oberlin grads, Jad Abumrad and Robert Krulwich.

Back to the story: In the interview, Adams talked about one individual who who had a huge influence on his own work, a composer with the impressive name of Edgar Victor Achille Charles Varèse (1883-1965). 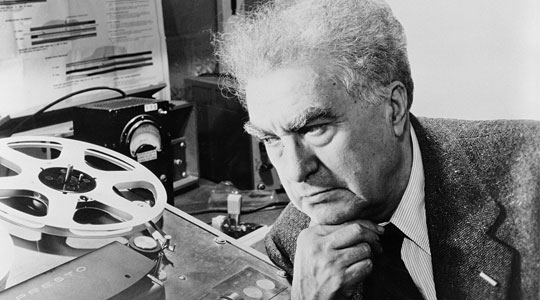 Adams discovered Varèse only because Frank Zappa’s early LPs had a quote from him on the back of the album covers, and Adams loved Zappa: “The present-day composers refuse to die,” he proclaimed, somewhat mysteriously. Intrigued, Adams finally found one of his albums (“Music of Edgar Varèse, Vol. II”), and played it…over and over and over.

But it wasn’t easy going. When Adams first fastened his ears on Varèse’s music, he was lost. “It all sounds…just like a bunch of noise to me,” he lamented. He remembers thinking, “I’ll never be able to know where I am in this. I don’t know what to hang on to.”

What did he do? His response was to immerse himself in it, “Gimme more,” was how he put it, his typical response to any new material. After throwing himself into Varèse’s work, he began to hear what he hadn’t heard earlier: “Oh, there’s that repeated note on the oboe; OK that’s a landmark, I can grab on to that. And here’s this place where there’s sort of this tattoo figure with the snare drums…” And gradually, he said, he began to hear the forbidden deserts of Edgar Varèse.

Listening to Adams’ account of how he grappled with something he found to be totally inaccessible resonated deeply in me in terms of my own work in museums, work which led me to think of museums, and our own Allen Memorial Art Museum, as a remarkable resource that could be used by everyone on campus, not just art historians and studio artists. But only if only we brought an open perspective to it.

I love museums – they are some of my favorite places on earth. But I often found that if, during my rambles through an encyclopedic art museum, I wandered into a room filled with abstract expressionist works, or something done in felt and lard by Joseph Beuys, a mild panic clouded my vision. My first impulse was precisely the opposite of Adams’ – it was to walk faster until I relocated myself back in a more comfortable landscape.

Perhaps I was stymied by my own credentials: I’m a smart guy but I couldn’t make heads or tails of this. And that only ratcheted up my always-lurking imposter syndrome, so I quickly high-tailed it down the hall until I was in a place where I was no longer uncomfortable.

So where is this all going? Four things struck me about Adams’ approach to Varèse, my own nervous reaction to contemporary art, and what it might mean for student learning:

In the first place, what Adams described as his first encounter with a “bunch of noise” and what I saw as an impenetrable wall of paint splotches, is what our students often see, hear, and feel. And the more I thought about it, I came to the conclusion that this is not actually a bad thing.  Listening to Varèse’s Density 21.5 for flute, coming to terms with Paul Klee’s Kettledrum Organ, understanding the interaction between viral capsid proteins and specific receptors, taking apart a regression function…these are zones of discomfort into which we should place our students. The question that is raised for us as teachers is how do we most productively open the potential for self-directed learning that is latent, even imminent, in that zone?

The second realization is one that I’ve discussed before: as experts in our fields, we reach roadblocks in our research or creative work at relatively high levels and have generally worked out how to approach, if not always resolve, the problems we face. But we have forgotten that novices hit roadblocks at a much lower level. Yes, we know that they can’t do calculus until they have studied algebra. But are we using concepts, even terminology that students find impassable because they’re simply not there yet. “The ontological predetermination that is implied in the following…”

Third, one step, perhaps the very first, in making productive use of the discomfort zone, broadly speaking what Lev Vygotsky called the “zone of proximal development,” is by literally or figuratively stopping our students in front of the problem they confront. Adams’ response to the barricade of Varèsian “noise” was to say, “Gimme more,” to immerse himself in it. My response to Jackson Pollock was totally different: I ran away. And I think the latter response is more common.

What do we do to root our students in the challenges they confront? I’ve found in my work in the museum that one way to do this is quite simply to slow them down, give them the time they need to contemplate the problem, pair them with another student, let them discuss what they are seeing and then talk about it with the rest of the class. Helping them take time in solving problems can work to counteract the hyperactiveness of their contemporary lives where (as Google will tell you) those 31,000 results took 0.25 seconds.

In the classroom, the best technique for this is the standard “think-pair-share” approach. Give students a challenging question, but don’t ask for an immediate answer, an answer which propels the same set of student hands up time after time. Instead, give students 5 minutes to work on the question: pair them up, have them share their thoughts and come to some conclusions, and then report back to class.

The final point is what really struck a chord for me in the Adams’ interview. What he found after repeated listening was a way in to Varèse’s music : the oboe repetitions, the snare drum tattoo. When we teach, I realized, we are trying to scaffold student learning so that they find a way in, something they can grab on to. This is a complex process, but one we often do without thinking: (1) we lead our students into a zone of discomfort where we (2) give them sufficient support so that they are neither threatened nor made to feel that they don’t belong there. Then (3) we provide them with the time and collaborative framework through which they can think most creatively and productively. Finally, (4) we may suggest how we have found our own “way in” to the problem, but ultimately we encourage them to find their own entrance points because when they do, they will have taken ownership over their learning. And it won’t be long before the Pulitzers start rolling in!

Added Nov. 10, 2014: Unbeknownst to me, it appears that John Luther Adams was appointed to the Oberlin Conservatory of Music in 1998. Looks like Oberlin’s fingerprints are all over this one!