Some years ago (April 25, 2011) I wrote an “Article of the Week” on empathy in response to the research findings of Sara H. Konrath, Edward H. O’Brien, and Courtney Hsing suggesting that college students are becoming less empathic, and significantly so. [“Changes in Dispositional Empathy in American College Students Over Time: A Meta-Analysis,” in Personality and Social Psychology Review 15.2 (2011): 180-198] In a meta-analysis of 72 samples of American college students, the researchers studied four aspects of “interpersonal sensitivity” including empathic concern (EC), or sympathy, over the misfortunes of others and perspective taking (PT), the capacity to imagine other people’s points of view. (The other two aspects were the tendency to identify imaginatively with fictional characters in books or movies and personal distress, the anguish one feels during others’ misfortunes.) The study found that EC scores declined by 48% when comparing students from the late 1970s/early 1980s and those in 2009; PT scores went down by 34%. For both, the sharpest decline came after 2000.

First, what are these characteristics and why should these declines be concerning? Psychologists debate exactly what “empathy” is. Some argue that it is a cognitive mechanism by which we can imagine the internal state of others. Other contend that it is an affective construct and question whether people’s emotions are matched directly to another’s affective state, whether empathy is primarily a manifestation of sympathy, or whether people empathize to reduce their own stress about another person’s situation, i.e., more about self-concern than other-concern. 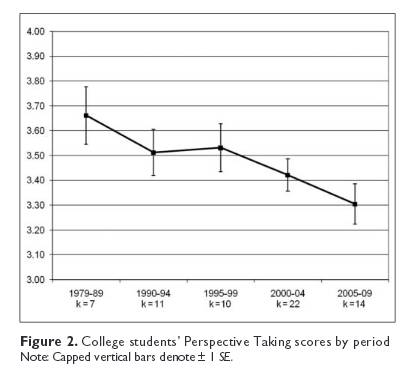 Primatologists and neuroscientists have also entered the discussion, speculating (to on-going challengers) that mirror neurons may be partially responsible for the ability to understand the behaviors and feelings of other people. In other words, our neurons can actually help us experience what another is feeling without language. Primatologist Frans de Waal’s research suggests that primates are biologically driven to behave in ways similar to those nearby (a kind of “contagion” effect) whether they think about it or not. (Here’s an example: take a look at the picture below and tell me what it makes you do.) But, simply put, when researchers talk of “dispositional empathy” they are talking about the tendency to react to other people’s observed experiences.

People who have higher “EC” scores tend to exhibit more prosocial behaviors, including volunteering, letting people into line ahead of them, donating to charities, etc. (Other factors are also involved. Paul Piff, a psychologist at Berkeley, recently reported on a series of studies that found that people driving luxury cars like BMW’s and Audi’s were 3- to 4-times less likely to stop for pedestrians in crosswalks than those driving less expensive cars. Just saying.) Similarly, higher Perspective Taking scores are related to prosocial outcomes including low social dysfunction (e.g. social anxiety, boasting, verbal aggression), and more other-oriented sensitivity.

So, when the research suggests a highly significant decline in EC and PT scores between 1979 and 2009, and a sharp fall after 200, there is reason to be concerned.

What does this have to do with us?

I know I’m not alone in observing student behavior (both at Oberlin and elsewhere) and wondering: seriously? They can seem so fine tuned, so hyper-sensitive to the (very-often-only-imagined) concerns of others that they will carry out public acts of self-flagellation and self-shaming. At the same time they can also be utterly ruthless as they take down, call out, and verbally eviscerate others whom they accuse of similar (?) acts of insensitivity or perhaps have actually made a mistake. No mercy will be shown. What is notable, at least for me, is the lack of carry over between admitting one’s own short-comings (even if they are imagined) and skewering others for theirs. It’s enough to remind me of “Bye Bye Birdie” where the parents lament, “Why can’t they be like we were, perfect in every way. What’s the matter with kids today?” Is this the empathy-gap that the research has disclosed?

Before we go too much farther, we should probably remind ourselves that, at one level, we weren’t any different. Our students are late adolescents and as many developmental psychologists remind us, their concepts of moral reasoning are still emerging. I can’t adequately represent this argument here (and I’m not a psychologist), but from the perspective of moral cognition, college students are moving from a dualistic worldview that sees absolute right and wrong, toward a recognition of multiple and potentially valid perspectives, and, ultimately, to a contextually relative approach to judging the adequacy of moral stances. If we accept the moral cognition approach, we must also accept that one of our primary tasks as teachers is not just developing our students’ content mastery, but engaging our students with content in meaningful ways that facilitates their ability to make complex moral judgments. In other words, rather than looking the other way when we see examples of moral reasoning (and ethical behavior) that make us want to hold our heads and cry, we want to be thinking of how to address these issues in class or with students outside of class. 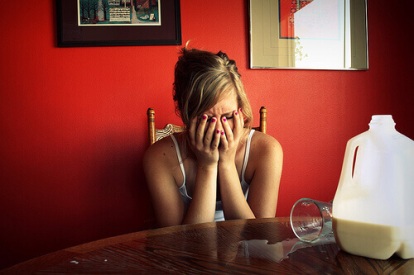 But if we return to the research, maybe we are correct in saying that today’s students are different. Affective theorists say that emotions, rather than cognition, are at the base of moral development. Martin Hoffman, for example, argues that empathy is the primary moral emotion, and that empathic capacities – “psychological processes that make a person have feelings that are more congruent with another’s situation than with his own” (30) are at the base of developmental change. Thus we are back to considering the impact of the three-decade drop in students’ empathic concern and perspective taking – and we’re also back to considering the importance for late adolescents of college as a place where such developments can occur… or not.

I’m even less competent to throw out sociological answers for why this decline is happening than I am in understanding the psychological factors that determine moral and ethical development. But, if it hasn’t stopped me before, why should it now?

We can look at a number of factors, none of which you will find too surprising. Personal behaviors mirror societal behaviors, and we (and our students) ping-pong back and forth between righteous fury and faux indignation, between Ferguson and “Viet Cong.” As Julia Turner’s “Outrage Project” in Slate put it, “Over the past decade or so, outrage has become the default mode for politicians, pundits, critics, and, with the rise of social media, the rest of us.” We move from outrage to outrage, and can often hardly recall what it was that produced so much stomach acid just last week.

Beyond a doubt, social media has had a dramatic and negative impact on empathic concern. Not only has it led to the development of a “call-out” culture, but its echo-chamber tendencies takes what might have been resolved, or at least defused, by a face-to-face chat and amplifies them into an example of moral outrage that requires that everyone chimes in and spills a bit of their own bile.

I’m also quite sure (although I lack the research evidence) that the replacement of actual political organizing – door-to-door canvassing, workplace organizing, street-corner leafleting – by on-line petitions has had a strong impact on the decline of our students’ (and our own) empathic concern. Those “older” forms of organizing require you to actually speak with people with whom you might disagree, and therefore teach you to do so in a way that can be heard.

Nor is it just about outrage. Surveys of in-coming first year students at colleges and universities report an increasing percentage of those whose “most important goal” is getting rich, and a declining percentage who would chose “helping others in time of need” as an important goal. Which takes us back to BMW’s in the crosswalks.

And what about us at liberal arts colleges?

The world of higher education is now deeply immersed in conversations about the benefits to be gained through a greater use of online resources in teaching and learning, or of a fully online education. Strong advocates of online learning point to the “student-centric” value of instruction that can be highly tailored to individual learning needs or to the fact that online learning can be more engaging than sitting in a lecture hall with 600 other students listening to a professor drone on in a barely incomprehensible manner. My concern here, however, is not the larger discussion of online vs face-to-face education (other than to observe that negative learning experiences can come in many different modes). Rather what does the research on empathy suggest about online learning?

In a recent article in Liberal Education, William Major suggests that the classroom is an extremely important social experience in which empathy can develop, something that cannot not happen online in the same fashion, and something that might help explain why empathic concern has been declining among college students. “Just as irony is virtually impossible over e-mail,” he writes, “the technological interface is the receding horizon of empathic learning.” Referencing the work of de Waal and others, Major suggests that face-to-face contacts trigger neuronal mirroring that is a fundamental part of learning and empathy, something that cannot happen when looking at others on a screen.

“Remembering, for instance, that mirror neurons are for sharing—transforming private action into ‘social experience to be shared with our fellow humans through language,’ according to neuroscientist Marco Iacoboni [Mirroring People: The Science of Empathy and How We Connect with Others], we can think of the classroom as a system in which each student and instructor has the capacity to alter the whole at the neuronal level.” He suggests that we can liken the classroom to the “brain-as-web” in that it constantly reorganizes itself to create new pathways for learning. “Our ability to learn from each other… creates an infinite number of pathways when we are present to each other.” He suggests that when a class is really working – with everyone contributing, listening, engaging – what might actually be happening is a “curious intersection of biology and learning,” where students are in a sense nourishing each other. (Of course, the same thing can happen in reverse when things go badly.)

I really liked that image. When classes are going well, something happens that allows what we’ve always tended to call “its chemistry” to work. Maybe we were just looking in the wrong discipline – we should be thinking as neuroscientists instead! The bottom line here is that it is in these face-to-face, highly interactional moments that our students are not just learning about French or calculus or philosophy; they are developing their capacity for empathic concern. And that’s a concern for us all. Our question should be how we use all the advantages we have at a liberal arts college to help our students become more empathic, more morally engaged. (And when they’re not looking, we can also put our heads in our hands while we hum a few bars of “Bye Bye Birdie.”)

One thought on “The Empathy Gap (and can we address it?)”